Governments and power generators continue to work to improve access to electricity on the African continent. Engie Energy Access, a subsidiary of French energy major Engie, recently signed a $60 million financing agreement with CrossBoundary Energy Access (CBEA), money that will be used to deploy solar-powered mini-grids in rural areas, primarily in Nigeria. InfraCo Africa, a London, UK–based financier, on Sept. 30 said it will commit $1.7 million to support off-grid energy developer Equatorial Power (EP), as EP brings mini-grids online in Rwanda and the Democratic Republic of the Congo (DRC).

U.S.-based Husk Power, meanwhile, recently announced it is commissioning six new solar mini-grids, each with generation capacity of 50 kW, in Nigeria. The facilities will serve both residential and business locations in Nasarawa State, joining a dozen other similar Husk mini-grids already in service in the region. Husk officials said the company is on track to complete about 20 sites in Nigeria by the start of 2023. The group earlier this year launched its Nigeria Sunshot initiative, with a goal to build at least 500 sites by 2026. The company said the mini-grids could benefit more than 2 million people and displace 25,000 diesel generators, which at present are used to provide power in many rural areas of Africa.

A variety of groups from different countries are investing in projects in Africa. InfraCo Africa is part of the Private Infrastructure Development Group, or PIDG. The agency is managed as a private company, with funding from government groups in the UK, the Netherlands, and Switzerland. “InfraCo Africa has a strong track record of delivering mini-grid projects in sub-Saharan Africa and we are pleased to bring our expertise to Rwanda and DRC, both of which are new countries for us to invest into,” said Nabil Saimi, InfraCo Africa’s head of business development. “We are committed to delivering access to clean power and are excited to support EP’s innovative approach to coupling power access with agri-processing and other vital stimuli for employment and economic development.” 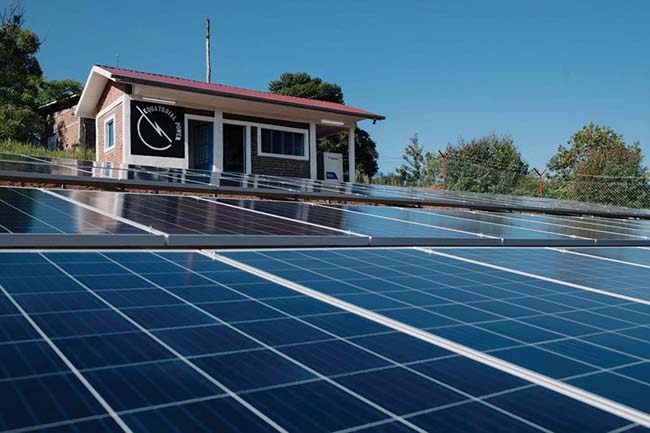 1. This mini-grid on Idjwi Island in the Democratic Republic of the Congo is among four such new facilities co-developed by InfraCo Africa and Equatorial Power. Courtesy: Equatorial Power

InfraCo Africa and EP signed a deal to co-develop four new mini-grids, as well as four agri-processing hubs (APHs), on Idjwi Island in the DRC (Figure 1). The groups also will co-develop four solar mini-grids, and three APHs, in southeast Rwanda. The mini-grids, ranging in size from 60 kW to 85 kW, also will incorporate battery energy storage to help balance intermittent solar power during rainy seasons in the two countries. The project is being designed to deliver about 3,300 electricity connections to low-income consumers in DRC, and 2,500 in Rwanda. InfraCo Africa said the mini-grids will enable more than 35,000 people to get access to clean energy. “We are happy to have the right partner to accompany us on our journey to go beyond electrons and offer modern and sustainable rural infrastructure services to the people of DRC and Rwanda,” said Dario Fallara, EP’s head of business development.

EP is active in areas beyond supplying electricity. The group also works in water purification, processing of agricultural products, and other activities. InfraCo Africa said that it has leveraged a $1.35 million capital grant from its sister company PIDG Technical Assistance to support the project in Africa. The World Bank, meanwhile, has committed more than $1 million in grant funding for the project deployment in the DRC.

“Now more than ever, solar mini-grids are a core solution for closing the energy access gap,” said Riccardo Puliti, Infrastructure Vice President at the World Bank, in a recent report on the company’s work in the mini-grid space. “The World Bank has been scaling up its support to mini-grids as part of helping countries develop comprehensive electrification programs.”

Engie Energy Access officials, along with the CBEA, said their projects are designed to further electrification in Nigeria’s rural areas. The Engie group will operate and maintain the mini-grids after they are built and commissioned. CBEA in a news release said Engie’s involvement “will ensure that residential, commercial and generation customers receive clean, reliable electricity, while providing high-quality, customer-centric services.” The companies are executing the agreement as part of the Nigeria Electrification Project (NEP), a program implemented by the Rural Electrification Agency (REA) of Nigeria, with funding from the World Bank. The fleet of solar mini-grids will receive support from the Performance Based Grant (PBG) scheme, a program supporting projects from several electricity service providers in Nigeria.

“CBEA has improved our project financing approach for mini-grids to deploy capital faster and more efficiently by investing from procurement,” said Annette Mumbi, associated director at CBEA, in a statement. “These improvements enable developers to build mini-grids and deliver electricity to more people at a faster pace. Our agreement with ENGIE is one more milestone towards closing the gap on more than 600 million people in Africa who lack access to electricity.”

“We’re excited to work in partnership with CrossBoundary Energy Access to finance this portfolio of mini-grids in Nigeria,” said Gillian-Alexandre Huart, CEO, ENGIE Energy Access. “This deal reflects our long-term commitment as a leading provider of energy access solutions in Africa. Most importantly, this agreement will connect marginalized rural populations in Nigeria with clean and affordable technologies and facilitate more economic opportunities in these hard-to-serve areas. Promoting productive usages is key to growing resilient economic networks in these areas.”

Power Africa has said that more than 65% of the population in rural areas of Nigeria does not have access to electricity. Nigeria, a country of more than 211 million people that borders the Gulf of Guinea on Africa’s south-central coast, earlier this year launched an Energy Transition Plan, with a goal of achieving net-zero emissions by 2060 while also providing electricity access across the country. ENGIE commissioned its first solar mini-grid in Nigeria in April of this year, a facility located in Gbangba in Niger state (Figure 2). The 90-kW system provides power to about 1,500 customers, along with small businesses in the region.

“This partnership shows what is possible within the off-grid decentralized renewable energy industry, in Nigeria and across Africa,” said Onyinye Anene-Nzelu, head of Mini-Grids with ENGIE Energy Access Nigeria. “It is a signal as well to other investors to come to Africa and become partners in progress to bridge its huge energy gap.”

The World Bank’s Energy Sector Management Assistance Programme, or ESMAP, in late September published “Mini Grids for Half a Billion People: Market Outlook and Handbook for Decision Makers.” The book identifies a handful of market drivers for the mini-grid sector, “designed to provide a trajectory to achieve full market potential and universal electrification,” according to the group. The market drivers include:

■ Increasing the pace of deployment through a portfolio approach to mini-grid development. The group said this could support deployment of 2,000 mini-grids per country annually.

■ Providing superior-quality service, which the group said is defined by providing reliable power delivery for homes, businesses, schools, and clinics.

■ Leveraging development partner funding and government investment to crowd in private-sector finance, with a goal of raising $127 billion in cumulative investment from all sources for mini-grids by 2030.

Husk Power, based in Fort Collins, Colorado, has been providing hybrid power generation networks to rural communities in Africa and Asia. The company is known for its solar-plus-biomass systems. The company is building its mini-grids in Nigeria as part of the earlier-mentioned NEP.

“Doubling our net-zero microgrid portfolio in less than a year is testament to Husk’s ability to play an important role in Nigeria’s Energy Transition Plan and its goal of providing energy for all within this decade,” said Olu Aruike, country director of Husk Nigeria, in a news release. “With continued support from our host communities, governments at all levels and other partners, we will create a rural energy platform to help off-grid and weak grid communities achieve their full economic potential.”