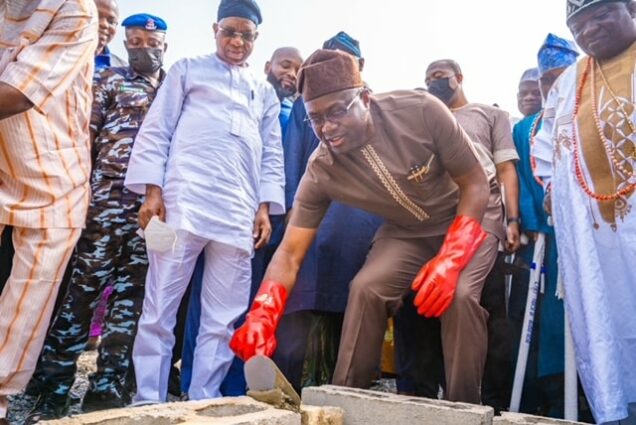 The Governor of Oyo State, Mr. Seyi Makinde, has performed the groundbreaking for the construction of 11 megawatts Hybrid Power Solution in a bid to address the unstable power supply in the state.

Makinde, performing the ceremony within the state Secretariat Complex in Ibadan, said that the project would be executed by Elektron Energy within six to eight months at the cost of N8.27 billion.

According to him, the contractor will build, execute and transfer the project, thereafter, the state government will repay the capital expenditure investment of Elektron Energy over a period of 10 years.

“And within this period, the energy company will operate and manage the infrastructure,” the governor said.

Makinde described the project as the right step taken by his administration to address the problem of electricity.

He said that Nigeria had been unable “to generate and distribute enough energy to provide power 24/7 to its citizens.

“Over time, capable individuals have purchased different sizes of diesel/petrol generators or invested in solar energy as alternative sources of power,” he said.

On issues relating to power distribution in the country, the governor explained that some people believed that only the Federal Government has the power to distribute energy.

“So, any power generated at the state or local levels must be fed to the national greed before it can be distributed, this is partly true.

“Section 67 :1 states subject to such terms and conditions, as the commission may fix, a distribution license will authorize the licensee to construct, operate and maintain a distribution system and facilities,” he said.

The governor said it was on the basis of these Acts that his government had entered a contract with Elektron Energy to finance and develop the 11 megawatts Hybrid Power Solution for the state government.

Makinde added that the company, Elektron Energy would use Ibadan Hybrid Power Limited, (Hypower) as the special purpose vehicle to execute the contract.

He hinted that the Hypower would be responsible for managing the distribution infrastructure through Ibadan Hybrid Distribution Limited “which will hold an independent electricity distribution network.”

Highlighting some of the areas that would benefit from the project when completed, Makinde said the state Secretariat where the project was sited would be the first beneficiary along with government facilities within the secretariat.

“Also, the Lekan Salami Sports Complex, Adamasingba, inaugurated in September would benefit from the IPP when completed.

“Others are 12 healthcare facilities, including Adeoyo Maternity Teaching Hospital and the State Hospital, Ring Road in Ibadan.

“This IPP will also power not less than 10 kilometers radius of public lighting under the Light Up Oyo project.

“In addition, it will provide for the energy need of the two judiciary complexes at Iyanganku and Ring Road in Ibadan.

“Also, Oyo State House of Assembly and a selection of schools within a defined catchment from the generation plant from the state secretariat will benefit,” the governor said.

He further hinted that his government was already thinking of incorporating a similar project into his administration’s vision to facilitate the expansion of the state economic base by making power available to industrial catchment areas.

In his opening remarks, the state Commissioner for Energy and Natural Resources, Mr Seun Ashamu, said the project was part of the initiative of Gov. Makinde’s administration to provide infrastructure for the economic growth of the state.

Ashamu described infrastructure as the bedrock of societal development and critical to induce economic development.

“Unfortunately in Nigeria today, we have an installed generation capacity of about 13,000 Megawatts with a willing average of about 4,000 Megawatts.

“But, we only distribute between 3, 500 and 4,000 Megawatts, which is further decreased by technical losses in the distribution infrastructure.

“Therefore, a project like this – IPP, will ensure the sustainability of what we are doing in the state as we will be able to guaranty 24 hours electricity,” he said.

The commissioner assured the people of the state that the 11 megawatts Gas and Solar Hybrid plant, when completed and inaugurated, would result in improved productivity of government staff and long-term cost savings, among other benefits.

Commenting, Mr Tola Talabi, the Managing Director of Elektron Energy, said that his company, Elektron Energy, was in a prime position to deliver the project for the people of the state in six months.

Talabi said the power plant, when completed, would drive productivity, development, jobs, services to the government and the people of Oyo State.

He said it would be a catalyst in showing that independent power projects could work commercially, in a viable way in the state.

“This hybrid power solution is made up of 10 Megawatts of gas power engines and one megawatt of solar power,” Talabi said.

He said the hybrid power project has significant benefits for the people of the state, including reduction in cost and pollution, driving productivity, among others.

Some of the government functionaries present were the Deputy Governor, Alhaji Rauf Olaniyan; Secretary to the State Government, Mrs. Olubamiwo Adeosun; some commissioners and Local Government Executive Chairmen.