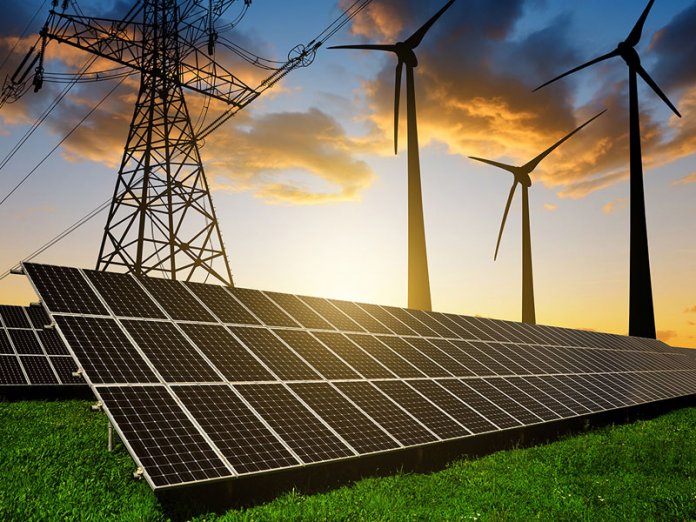 As the world continues to record high level of modernisation and globalisation, one of the things being beamed searchlight on is renewable energy.

Research has shown that as at 2019, more than two-thirds of worldwide newly installed electricity capacity was renewable even as in 2020, photovoltaic solar and on-shore wind are the cheapest forms of building new electricity generating plants.

According to Wikipedia, renewable energy is useful energy collected from resources which are naturally replenished on a human time-scale, including carbon natural sources like sunlight, wind, rain, tides, waves and geothermal.

Now, bringing the matter home, policymakers and experts in Nigeria are paying increasing attention to the renewable energy and energy efficiency sector as an elixir to economic growth and investment portfolio.

Globally, there were an estimated 10.5 million jobs associated with renewable energy industries with solar photovoltaics being the largest employer.
Again, it has been stated that rapid deployment of renewable energy and energy efficiency results to energy security, climate change mitigation, investment promotion, pocket-friendly, and other economic benefits,

Indeed, determined to increase access to power supply across the country, the Standards Organisation of Nigeria (SON) has disclosed that it is using standardisation to open up improved investments in the renewable and efficient energy sector.

A statement from the office of the Director General, SON, explained that the solar power industry relies heavily on standardisation, adding that renewable energy has become increasingly important across the country.

The agency unveiled recently in Abuja, new energy standards for energy meters, solar photovoltaic (PV) panels, inverters, batteries and charge controllers.
According to the standards body, this is to substantially increase the share of renewable energy in the global energy mix under the United Nation’s Sustainable Development Goals (SDGs).

Besides, the standards body stated that in a country such as Nigeria where expensive and ecologically harmful diesel generators are widely used, the unveiling of new standards would improve access to electricity in Nigeria.

SON said it would deploy a multi-stakeholder approach with consultations and inputs from relevant public-private entities to develop a more regulated and standardised market that encourages further investments into Renewable Energy (RE) and Efficient Energy (EE) sector.

To achieve this, the SON is currently being supported by the Nigerian Energy Support Programme (NESP), a technical assistance programme co-funded by the European Union and the German Government and implemented by the Deutsche Gesellschaft für Internationale Zusammenarbeit (GIZ) GmbH in collaboration with the Federal Ministry of Power.

SON noted that due to its flexibility and affordability, solar power has fast become the most popular form of renewable power.
SON said NESP aims to improve the framework conditions for investments in the application of renewable energy and energy efficiency and rural electrification, saying that its main objective is to provide guidance towards the achievement of the objectives of the strategy set for the implementation of renewable energy policy.
“NESP aims at enabling and fostering investments in a domestic market for Renewable Energy (RE) and Energy Efficiency (EE) and improving access to electricity in Nigeria,” SON declared.

Recall that in 2017, the agency launched the Energy Guide Label; a seal to guide Nigerians on the amount of energy consumed by air conditioners, lamps and refrigerators in collaboration with the Nigerian Energy Support Programme (NESP).

The Energy Guide Label was designed for the Nigerian market to be attached on electrical appliances to provide information on the accurate energy consumption of a product. The agency has been enlightening consumers on how to make informed purchasing decisions on electrical products and appliances.

Meanwhile, the agency would soon commence a nation-wide campaign against sub-standard electric appliances.
Disclosing this in Abuja at the launch and awareness creation of Photovoltaic (PV), charge controllers, inverter battery and metering standards, the Director General, SON, Mallam Farouk Salim warned all operators in the power sector to be ready to face the full wrath of the law ‘because SON will apply zero-tolerance to all sub-standard appliances.

He declared: ‘I must send out this strict warning to manufacturers, assemblers, importers, and distributors of all products in this range that will want to cut corners to be ready to face the full wrath of the law because SON will apply zero-tolerance to all sub-standard appliances.”

Salim also disclosed that the agency has been doing all it could to put in place all the needed conformity assessment measures to support the implementation and enforcement of the new standards, adding that testing equipment have been procured and are being installed.
He stated that the agency has been strengthening the capacity of officers through training and retraining, thanking GIZ for the just concluded first phase of the training on the standards while accreditation of the laboratory will be pursued for global acceptance of the reports.
There will be high level surveillance of the products imported/local, manufacturing/assembling companies will be professionally and competently inspected.

Analysts said however, that it would require a concerted teamwork involving all stakeholders to achieve the needed success that will benefit all, adding that useful information would be key while seeking the maximum cooperation of operators.

The SON boss lauded the collaborations and contributions of all related MDAs towards the project, soliciting their support to work together with SON in standards development even as he expressed hope that stakeholders would keep deploying the Nigeria Industrial Standards (NIS) appropriately in order to support the implementation of the standards as well as sustain the global fight against climate change and global warming.

According to Emmanuel Oke, an engineer, all stakeholders in the power sector need to contribute their quotas towards developing strategies for effective implementation and public awareness of the new electricity appliances standards while commending the Nigerian Energy Support Programme/GIZ and other experts for the technical supports and contributions towards the development of the standards.

‘Globally, lack of enough efforts to provide sufficient energy have resulted in challenges and impacts that affect the climate, causing untold greenhouse effects. In Nigeria, we crave for high-energy sufficiency while expecting to protect nature.
“Therefore, we can no longer afford to ignore actions against greenhouse effects, we must therefore consider the environmental consequences of energy production and use.
“It is to this end that these sets of standards and the other approved standards in this category are considered very important, timely and instruments for actions to support energy sufficiency as well as mitigate the negative effects of climate change.’ he stated.
Another stakeholder, Callistus Mba deposed that through standards and conformity assessment, efficient, reliable and sufficient power solutions would be provided for rural, urban dwellers as well as industrial needs, adding that with the collective expertise, ozone layer depletion and other environment challenges would be mitigated.

“As these standards for Photovoltaic modules, Charge Controllers, Electricity Meters, Inverters and Inverter Batteries are launched, opportunities for fair trade practices, lowered cost of manufacture/assembly through low or eliminated factory rejects, consumer satisfaction, business expansion, employment creation and career development will be the requirements of these standards to ensure Good Manufacturing Practices (GMP), the best product quality that will satisfy all consumers at all times’’ Mba asserted.

Insider claimed that SON has been doing all it could to put in place all the needed conformity assessment measures to support implementation and enforcement of the standards. While hoping that the plans for surveillance, implementation and public awareness for the standards in the Energy sector would help disseminate quality requirements and popularize the need for quality grid-tied and off-grid solar systems among power investors, producers, and consumers.